Sant Sadurní has various public festivities, traditional holidays and local events scattered across its calendar. Some date back hundreds of years, while others are more recent. The best time to taste a locally produced cava or a traditional roast duck with prunes and pine nuts is during the Week of Cava, or during any other local festivities. These include:
The Capital of Cava Sardana Meeting
Last Sunday in April
This Sardana Meeting celebration is a wonderful festival for fans of this traditional dance and for those interested in learning more about it. Besides dancing, the ceremony includes paella (a traditional rice dish) and cava for everyone. The sardana is a type of circle folk dance typical of Catalonia. The dance circle can be opened to a highly variable number of dancers. When danced in the streets and town squares, small circles of dancers can be seen to form and grow, often passers-by join in, leaving their bags in the centre of the circle.

Gastronomic May
The entire month of May
Sant Sadurní d'Anoia is well known by cava, but there are also other excellent gastronomic products that this town has to offer. In May, visitors have the opportunity to try the most typical local dishes made with autochthonous products. Local restaurants develop the menus based on the products and dishes of typical Mediterranean cuisine and cava is also one of the main ingredients. They combine tradition with the culinary modernity of each chef.
Enjoy the pleasure of tasting the finest specialities of butchers', bakeries, chocolates' and wine stores such as a home-made sausauge with cava or the cork-stoppers-shape chocolates with marc of cava…

The Feasts of the different Neighbourhoods
Corpus Christi, the eighth 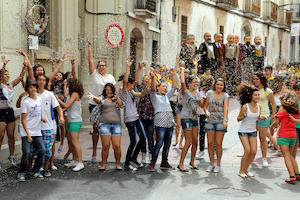 The six traditional neighbourhoods of Sant Sadurní, plus the Town Hall, celebrate their own festival. The Neighbourhood Feasts along several streets of the town centre in Sant Sadurní d'Anoia continue the old tradition of fostering solidarity, friendship and cohesion among neighbours. During the week-long feast, the traffic is cut off in several parts of the neighborhoods, where multiple popular activities are organized outdoors, such as butifarrades, xocolatades (gatherings where people drink chocolate), concerts, sardanas, etc. The neighbours decorate the streets with allegorical themes and offer cakes and cava to everybody.

Fairs and Festivals
6th-9th September
This is considered one of the most traditional festivities of town. Historically September was a very important time given that it coincided with the grape harvest. During this time the countrymen and women would go to the markets and fairs in order to purchase horses, carts, wineskins and all the necessary tools needed to till the land, harvest the grapes and make wine. Over the years it has been demonstrated that the recreational aspect of this agricultural sector has been equally as important as the commercial side, so folk activities such as street parades, the Sardana dance and other century-old traditions coexist with new events, as the meeting of lacemakers or the fire run of the Se Me'n Refum devils... 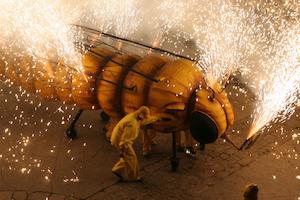 This is a Folkloric festival that aims to show reverence towards the difficult period of poverty after the vineyards were destroyed by the plague in 1887.
Sant Sadurní had in that period an important role in the fight against the phylloxera thanks to the determination with which the village faced the problem. In memory of these events the town celebrates the Phylloxera Feast, a small part of its history recalled in a merry and festive way. The trying past is remembered through various dances and plays. These art forms demonstrate the spirit and willpower of the population who successfully overcame the catastrophe and some years later obtained the product that nowadays distinguishes the town: Cava.

Cavatast
First weekend in October
The Cavatast or Cavataste is a sparkling wine and gastronomy fair which took place for the first time in 1997. This fair is a meeting point for people who work in the sparkling wine sector and for all those fond of Cava (Spain Designation of Origin) who want to taste the best cava products, as well as cava cuisine, and to know the latest innovations in the market.
Year after year thousands of bottles are opened for visitors to taste, savour and appreciate the good products offered by exhibitors. Cavas served are from different denomination wine-growing areas, but the Penedès is the chief one. Besides, cava samplings are complemented with tasty products made by local restaurants, butchers and confectioners, with cava as the main ingredient.
The fair is held to coincide with the Week of Cava, with multiple activities in Sant Sadurní d'Anoia which are worth seeing.

Cava week
Second week of October
The Confraria del Cava brotherhood celebrates the Week of Cava, a whole week of activities, presentations, conferences, to promote Cava and its culture.
The festivities begin with the traditional crowning of the Cava Queen, who arrives at the ceremony accompanied by a royal court. After tasting the first pressings of the year's grape harvest from the esteemed fellowship of Sant Sandurní, the queen proceeds to a ceremonial dinner held at Torre Ramona.
Along the way, tourists who attend are able to enjoy folk music concerts dedicated to the vibrant sounds of the Catalonia region, along with workshops and talks dedicated to appreciating the special qualities of Cava. 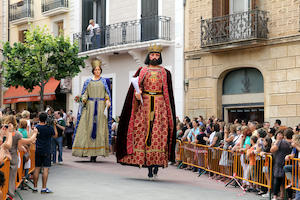 This celebration takes place in honour of the patron saint of the town. Although it is usually a cold and modest celebration, it is nevertheless one of the most well attended. Visitors can see the town's traditional festive statues and puppets, folk elements including giants, large-headed costumed characters, and demons, dancing in the street. From this point until Christmas, weekends in Sant Sadurní d´Anoia are swarming with people visiting the various local cava cellars.

The hockey and sports
The timeless sports tradition of Sant Sadurní can be linked back to roller hockey, which was an exhibition sport during the Barcelona'92 Olympic games and has since influenced the town's history. The local team A.A. Noya has always been ranked among the most elite teams and has a large following given that their success has added to the fame of the town. Some of these victories include the Spanish League, the European Cup, Second Cup and Supercup, and the Catalan League. Other popular sports in Sant Sandurní d'Anoia include soccer, swimming, basketball, handball, and tennis. Lastly, road cycling deserves special recognition in that due to its large numbers of respective athletes in the area, it earned Sant Sandurní d'Anoia the title of Subsidiary Olympic Host in the '92 Olympic games.